Hi, I’m Clark and Gunsmithing is my craft.

Whether you need a completely disassembled thorough cleaning and lubrication, a receiver drilled and tapped for a scope, a pesky jam-0-matic fixed or a trigger pull adjustment you can be sure that the job will reflect my commitment to old school craftsmanship.

A lifetime plinker and sometimes competitive shooter I understand that to gun owners a gun is more than some pieces of metal and wood. I share your reverence for the art, design and craftsmanship that goes into producing a fine firearm. And I also understand that the less than top of the line old shooter you brought in belonged to your father or grandfather and you wouldn’t trade it for a million bucks. In this shop, I’ll treat them both the same.

I have completed an extensive two-year study in professional gunsmithing and related fields including welding and machining earning ten certifications. I have also completed additional courses in Firearms Appraisal and Law Enforcement Armorer. All certifications are by the American Gunsmithing Institute. 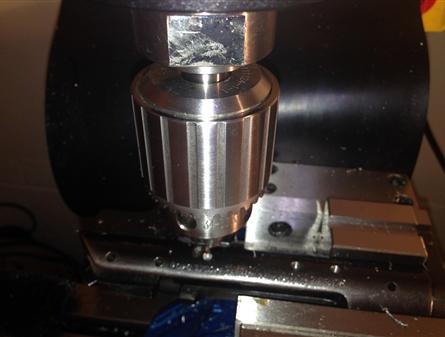 Even before I had any thoughts about gunsmithing I grew up around tools. My dad and granddad owned a couple of small manufacturing companies that made rock cutters, grinders and polishers for the lapidary hobby. It was a family effort. So I started helping even in elementary school. When I was a little older I learned how to use the buffer, grinder, drill press and metal lathe. Drilling and tapping holes isn’t new to me.

In fact, it was Granddad who taught me the old school “right way” to drill and tap the holes in a Savage 340 that a customer brought in. No one claimed it was a high end-gun. But it had been his father’s gun. I could have done the fast and easy way, the way lots of gunsmiths and machinists I know would have done it. Simply drill the holes clear through the side of the receiver, tap the hole and smooth up the inside of the receiver a little. As long as the mounting screws don’t protrude inside the receiver and interfere with the bolt the job is done good enough. Sure, if you look into the receiver you will see the four holes and the ends of the screws.

But that is exactly what I didn’t want anyone to see. I did it he way my granddad taught me; measure the distance that the screw protrudes though the holes in the base and measure the thickness of the metal of the receiver at the point you are drilling. You have to drill a little deeper than the distance that the screw protrudes but less than the thickness of the wall of the receiver. Oh no! There’s math involved!

Math isn’t the only tricky part. Tapping a “blind” hole is trickier than a through one. As you turn the tap you have to have a feel for the resistance, because the end of the tap is going to hit the bottom of the hole. If you keep turning you’re going to break the tap off in the hole. And that’s a real pain in.. uhh.. it’s hard to get out.

So the choice is fast, easy and good enough or measure (twice) do the math, go slow, take a little risk. You know how I do it. That’s the craftsmanship part of Clark Craft Gunsmithing.